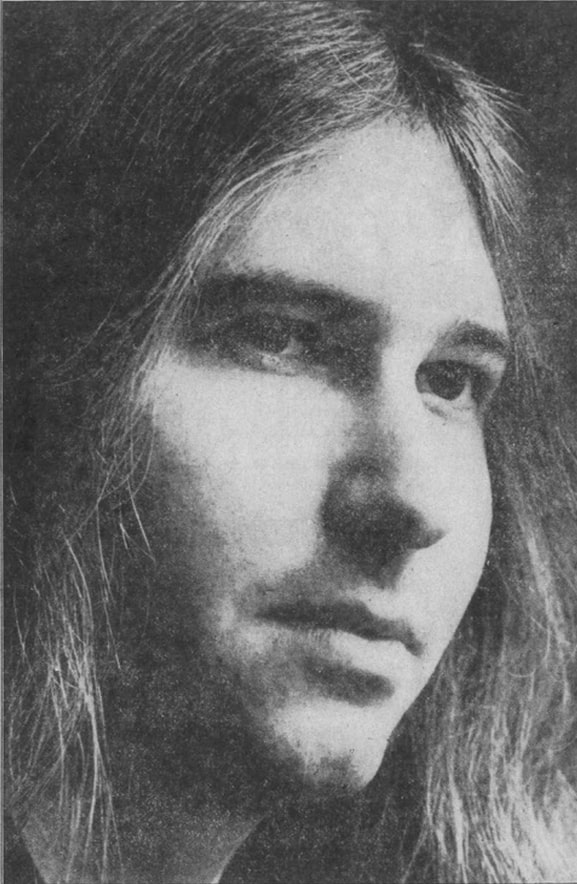 The scene is the office of record-company executive Clive Davis, where two struggling musicians have just finished a frenetic piano-and-vocals rendition of “For Crying Out Loud.”

Davis stops fiddling with his pencil for a second, looks to pianist-composer Jim Steinman, and pronounces his verdict on the audition. “To be brief. Mr. Steinman, do you listen to contemporary music? Well, you should listen more, because your songs don't reflect what the trends are today.

“People want a very simple structure — the verse, bridge, and chorus, and then the chorus repeated several times. They basically want ABCCCC . . . . Your songs should stick to that structure. That song I just heard went beyond ABCCCC all the way to W. No one's going to sit through a W.”

Davis then turns to Steinman's associate and intones, “As for you, Mr. Loaf, you have a very powerful voice, but it's not really a rock-and-roll voice. It's a Broadway voice. It's more like Robert Goulet or Ethel Merman.

“I don't see any commercial value in this. I'm sorry. Thank you very much.”

Jim Steinman may sound a mite smug as he recalls his audition for Clive Davis three years ago, but he has reason. Davis was one of 40 record-company honchos who turned thumbs down on Steinman's first album-writing effort before Cleveland International finally bankrolled it.

That album, featuring vocals by the guy with the unlikely Broadway voice and the unlikelier name of Meat Loaf, is “Bat Out of Hell.” In the two years since Its release, it has become the best-selling debut album in history, racking up sales of 8.2 million copies worldwide. Which goes to show that if the music is good enough, people will sit through a W.

One measure of Steinman's success is the loft headquarters of Meat Loaf Enterprises, a plush oasis in the gritty commercial district of Hell's Pantry (on Manhattan's West Side, just south of Hell's Kitchen). Amid the platinum records, expensive audio equipment, and music memorabilia, Steinman sits back and recounts with humor rather than bitterness his frustrations at the hands of short-sighted record companies.

For Steinman, it's all part of the business, and business couldn't be better. His music career, which began as a side-line during his undergraduate play-writing days at Amherst College, is thriving. Meat Loaf's second album, which Steinman wrote, should be completed by June. Then comes Steinman's own solo album, “Bad for Good.”

Indicative of the 30-year-old composer's wunderkind status, Todd Rundgren is producing the album, and Bruce Springsteen appears as a guest musician.

Steinman's most recent effort, the movie score for “A Small Circle of Friends,” has been well-received, even if the Vietnam-era movie got mixed reviews. In the future lie four more movie projects in stages of completion ranging from pipe dream to pre-production.

Steinman has a three-movie deal with Warner Brothers to do two music-orient-ed pictures and possibly a horror flick. Down the road a piece is Steinman's ultimate fantasy, a futuristic rock-and-roll extravaganza called “Neverland,” based on the story of Peter Pan. In fact, Steinman has so many projects cooking that he's running out of burners.

Their significance is that he's finally emerging from Meat Loaf's gargantuan shadow into the limelight himself. He says he'll continue his alliance with Loaf — a relationship he describes as "Siamese twins separated at birth" — but the past year has brought several close calls that threatened to end Meat Loaf's career.

The 300-pound singer had planned to record Steinman's "Bad for Good" album himself, but a grueling road tour in-flamed his throat to the point where it was questionable whether he would ever sing again. Steinman and Loaf took movie hiatuses — Steinman scoring "A Small Circle of Friends," Loaf appearing in "Roadie" — then returned to the studio four months ago. By then, Meat Loaf's physical problems had been replaced by psychological ones.

“When January rolled around, Meat had developed a mental block on the songs, which is understandable because we'd sometimes spend eight hours in the studio trying to get one line just right. He worked so hard that he only put more pressure on himself," Steinman says.

"Meat even learned self-hypnosis to overcome the problem. He'd be recording and say, 'Stop, I've got to hypnotize myself.' The next thing I'd know, he'd be banging his head against the wall, which I thought was a very brutal way to hypnotize himself. It didn't work, but there are three holes in the plaster of the Record Plant walls with Meat's headprint —in case the FBI ever needs it."

Steinman and Loaf finally agreed that the singer should do an entirely new album and let Steinman record "Bad for Good" himself. So far, the plan has worked well, and Loaf is back to his old eardrum-shattering self.

In the meantime, however, Steinman has gotten a taste of the movie business and, despite the rigamarole involved, he has liked what he's seen. His foray into films began when he read that a college friend, Rob Cohen, was directing his first picture, "A Small Circle of Friends." which stars Brad Davis, Karen Allen, and Jamison Parker in a love triangle. 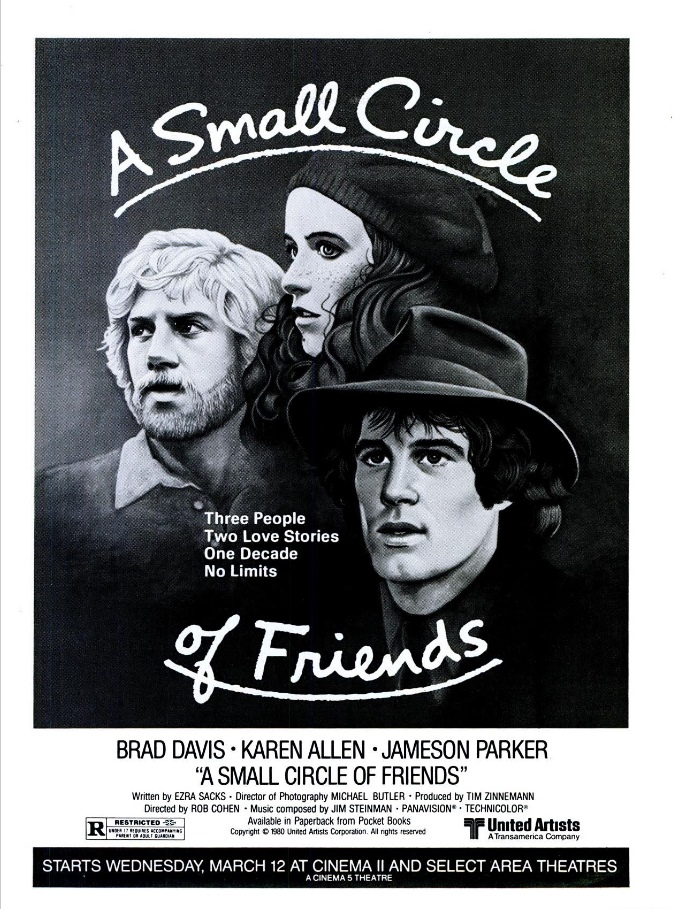 Cohen invited Steinman to a screening of a rough cut of the film and afterward asked Steinman how he would handle the music. "I told him that I didn't hear any pop music like 'Coming Home' used, because it has been done already and it's distracting," Steinman recalls. " 'Circle of Friends' is such a traditional romantic story that I thought it should have classical romantic music, but with strong melodic chords so that it sounds contemporary. Cohen said that's exactly what he wanted."

Last fall, Cohen sent Steinman video cassettes of a rough cut, and Steinman spent a month absorbing the nuances of various scenes. Then he set about writing the score. "Rob and I sat down and went through the video cassettes scene by scene and decided where the music should go. There's a timer accurate to a hundredth of a second, and I'd sit in this loft at the piano and look at the videocassette machine and play along with it. I then wrote out the music, and a friend orchestrated it."

Next came the painstaking process of recording and synchronizing the music on a Hollywood soundstage. The film was projected on a huge screen behind a 60-piece orchestra. The conductor, aided by a battery of timers, cued the orchestra when to cut in and out — down to a 10th of a second.

Steinman says he's pleased with the result: "I think 'Small Circle of Friends' is the first movie I've seen that really captures the feeling of the late Sixties. At heart, it was a very romantic period, and the movie and music caught that feeling. "I think the movie's interesting because it's almost a Rorschach test — some people resent it, others think it's perfect. No one has been indifferent, which is a healthy sign. To me it's an intensely passionate story that just happened to be set in that turbulent era."

One of the movie's pleasant surprises is Steinman's lilting classical score. Coming from the man who wrote "Bat Out of Hell" and "All Revved Up with No Place to Go," the music seems like a radical — and conservative — departure. "I'm not afraid of old Hollywood traditions, such as using strings for romantic interludes," he says, running his hand through his shoulder-length, Tiny Tim-style hair. "I wanted the score to be traditional. And because it is, in many ways it is innovative. Most films about the period would have used rock-and-roll."

The experience was enlightening. "Most movie scores are mediocre, and I can see why now that I've worked on one. Part of it is that these composers take on five films a year and it almost becomes hack work. Also, most of them have so little artistic control that they feel, 'Well, it's going to be butchered anyway, so I can't get that committed to it.' I was the exception with 'Small Circle of Friends' because Rob Cohen let me work so closely with him."

The future? "What I'd really like to do is alternate between records and films. Films are what I want to do most because my background is actually in films and theater. I never intended to write music until my junior year at Amherst. I started writing music because I figured no one wanted to see my plays without music.

"I just kept writing music and figured maybe I could do musicals or operas. I grew up [in Claremont, Calif., and later on Long Island] listening to rock-and-roll and opera. I'd go from Wagner to Little Richard — very disorienting, but wonderful. They didn't seem that different to me because they're both so physical and have such epic qualities."

Steinman likes epics. The first of his three pictures for Warner, "Dance in My Pants," covers three generations. It goes into production at the end of this year. The story is based on a song from his upcoming "Bad for Good" album. He describes it as a sequel to Meat Loaf's classic "Paradise by the Dashboard Light."

Next is "Guitar," about the life of a Fender Stratocaster from 1952 to 1936, covering all the people who own it: You not only get a story of the guitar but also a saga about America and the changes in music. It's an adventure story with lots of action, narrated by the guitar."

Steinman's pipe dream is "Neverland," which he has been pondering since the "Bat Out of Hell" album. "When I wrote the songs for that album, I had 'Neverland' in mind. It's a rock-and-roll version of Peter Pan, set in the future.

"Peter Pan is my all-time favorite story, and another case where people don't know the original — which is dark, chilling, and very exciting. There are undercurrents of violence, plus all kinds of sexual connotations that get washed out when a Mary Martin or Sandy Duncan plays the role.

"I'm really obsessed by 'Neverland.' No one has combined a fantasy world with the future and rock-and-roll, and that's a perfect combination. The Peter Pan story has always seemed like a great rock-and-roll metaphor to me anyway, since rock-and-roll has been described as a world of lost boys who never grow up."

In the case of Jim Steinman, the metaphor doesn't quite work. His appearance — long hair, cowboy shirt, and bell-bot-tom jeans — may make him look like a displaced child of the Sixties, but judging from the ambitious goals he has set for himself, he's anything but lost. And considering the successful career he has with Meat Loaf, anything more would be gravy.