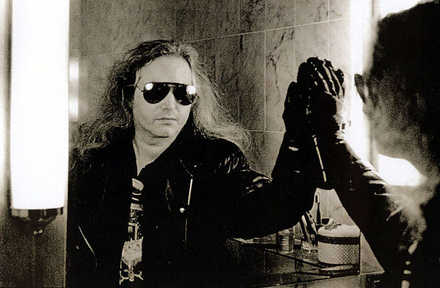 Jim Steinman worked with Meat Loaf and Celine Dion on records -- and with Andrew Lloyd Webber on "Whistle Down the Wind." Ahead of an Ordway run, Steinman recalls the musical's legendary stops and starts.

Rock lyricist, songwriter and record producer Jim Steinman is perhaps best known for his work with such artists as Meat Loaf ("Bat Out of Hell") and Celine Dion ("Falling Into You"). But Steinman also writes for theater. The musical "Whistle Down the Wind," his 1996 collaboration with composer Andrew Lloyd Webber, died en route to New York but was successfully revived for a long run in London. It opens Tuesday at the Ordway Center.

Based on the Mary Hayley Bell novel of the same name and set in the South in the 1950s, "Whistle" is a story of youthful faith and innocence. Three orphaned children, living by themselves, discover a bearded man hiding in a barn and become convinced that he is Jesus. Eventually, word of the kids' secret savior gets out. "Whistle" was made into a 1961 movie before being adapted for the stage.

Q: How did you first become involved with this project?

A: It started in 1995. At first, the idea was to do it as a film. Patricia Knop ["9½ Weeks"] wrote the most brilliant screenplay. And Andrew and I thought that [Steven] Spielberg was going to direct it. But, in the end, [Spielberg] got scared because he'd never done a musical.

Q: So theater was the fallback option?

A: Well, at the same time that all of that Spielberg stuff wasn't happening, we did it as a condensed theater piece at Andrew's summer festival in England. The audience loved it. The question everyone had was, 'Why aren't you doing this bloody thing onstage?' Switch to the Peninsula Hotel in L.A. not long after. We are there, I don't remember why, and Hal Prince, whom Andrew just revered, calls and asks why he hasn't been contacted about it. It was decided that it would be a play, with Hal directing. It would try out in Washington, then go to New York.

Q: Prince and Lloyd Webber had worked together on "Phantom" and "Evita." What were the rehearsals like for "Whistle"?

Q: Was that enough time?

A: Well, I assumed the main work would go on after it began, that this would be perfected that way. I had this great vision of a '30s movie musical being worked on out of town, with me doing rewrites and all of us making it perfect.

Q: Did you have a gut feeling about how it was going?

A: I remember meeting with Andrew at Trump Tower later and he was indecisive about the whole thing. One week he would say, 'Jim, I just don't know, should Hal Prince direct this or not? He's getting on in years.' Hal was in his 50s then. The next week, he would say the same thing, only Hal is now in his 60s. In three weeks or so, Hal had aged three decades in that conversation.

Q: When the show opened, was it ready?

A: No. But everyone knew it. I wanted to work on it.

A: I get tons of bad reviews. They don't bother me. But Andrew was stung by it. The [reviewer] did a hatchet job on Andrew, sending him into the deepest depression. He felt shattered. You would think that he would be immune to it with all of his $850 million, but he was almost in tears. The next day I woke up, went to the theater, ready to start the rewriting. The stage manager said that Andrew was gone and Hal's off skiing. I stayed in Washington for two weeks, hoping to get cracking on it. But they were gone.

Q: "Whistle" is legendary for failing before Broadway. You also wrote "Dance of the Vampires," which wasn't exactly well-received in New York.

A: Well, the critics were right about that one. The New York production was totally ruined. I didn't go to the opening. [Star] Michael Crawford was awful. He played the vampire as a clown, with a horrible Italian accent.

Q: You seem to have better luck abroad.

A: In Austria, that show is called "Tanz der Vampire." It was staged brilliantly by Roman Polanski in Vienna, where it's been running for 10 years.

Q: What was it like to see this new version of "Whistle" onstage? Is it still your work?

A: Disorienting. So much of the script has changed. And they have taken out many of the great effects. But the two leads were brilliant, which is the key to the show. The heart of the show was intact.

Q: Will this new production get to New York after all?

A: That's up to [director/producer] Bill [Kenright]. I have no idea. I think his attitude is to do it over a period of years, to build an audience for it regionally, then perhaps take it to New York. It's an amazingly daring thing to finance a touring production of a musical no one knows.

Q: What made it work in Britain but not in the U.S.?

A: I love the premise, but generally, it's been misunderstood here. People have a hard time dealing with the idea [in the show] that Jesus is outside in the barn. But you have to remember that the kids' mother has just died, why wouldn't you want Jesus around, since he can raise the dead? It ran for 5½ years in England. They got it.