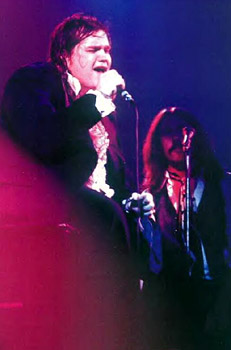 Every once in a while a musical act will make some noise and "the word" will circulate through the crowd that cares about such things. "The word" is nearly always: "You've got to see this act." Keep in mind that "you've got to see this act" is a lot different from "you've got to hear this act." The idea is that seeing is believing, and some major performers have made "the word" somewhat valid: Bruce Springsteen, Barry Manilow, Billy Joel. For a time, it was the Tubes; then Warren Zevon was the act to see. Until now. Until Meat Loaf.

He is the ultimate "must see," and this area's getting its first chance to check him out Saturday night, when he plays the Warner. "Plays" is not quite right: "Storms" is more appropriate.

You see, the full on Meat Loaf is not just "you must see this act" it’s "you must see this act before he dies from exertion." Meat Loaf is 6'2" and officially weighs 240 pounds, though most people swear he tips the scales closer to 300. (Size 52 shirt, for you rock 'n' roll haberdashers.) He looks a lot like a zeppelin with feet - until the music starts. Then he looks like a Tasmanian devil on speed. A fat Tasmanian devil on speed.

Meat Loaf sweats. He groans. He throws his matted hair out of his eyes by snapping his neck back on a classic '60s move. His band shakes and contorts. This rock 'n' roll is not pretty. Pretty or not, though, Meat Loaf's first album, "Bat out of Hell," has sold nearly 300,000 copies nationally and more than 3,500 locally - not bad for a record that very few radio stations are playing in their regular rotation.

Not only that, but Meat (as he's known to intimates) has had a three-page spread in People magazine and a part in a Samurai skit with John Belushi on "Saturday Night Live." (He also had two musical spots on the show, but was admittedly weak.) All this from a guy whose name is synonymous with the special in a cheap diner.

Meat Loaf is actually 29-year-old Marvin Lee Aday. After seeing his stage act, it's hard to believe that he'll make it to 30. "No holds barred" is an understated way of putting it. In fact, "Bat out of Hell" seems more an excuse to get the band on tour than a way to debut a new musical talent.

The record has some Bruce Springsteenisms, but they are implied than copied. The title cut and parts of "Paradise by the Dashboard Light" have the same rough street sound that Springsteen made viable, but Meat Loaf's composer, Jim Steinman, writes to a much younger audience. 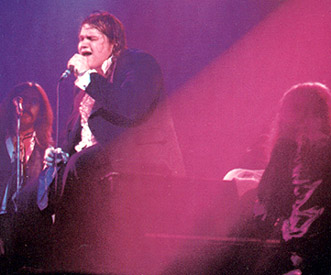 "Bat" has some surprisingly calm tunes ("Two out of Three Ain't Bad," "Heaven Can Wait"), but "calm" is not where Meat Loaf is coming from. "All Revved Up With No Place To Go" is more like it but proves that, on vinyl at least, Meat Loaf is not as good a belter as Ted Nugent, Robert Plant or most other true rock thunderthroats.

Technically, the album benefits from the presence of some of Springsteen's E Street Band (Roy Bittan and Max Weinberg, Utopia's Roger Power, Edgar Winter and the production of Todd Rundgren.) Rundgren is no stranger to strangeness, having once produced the New York Dolls, and handles Meat Loaf with the right dashes strings and shrieks. The songs are not very strong, but there are some clever moments "Paradise by the Dashboard Light" features New York Yankees announcer Phil Rizzuto unwittingly describing a teenage sexual adventure in a car - "He's on first base, trying for two . . ." - get the idea? You have to hear the way it’s done!

And a lot of people have apparently had to see the way it's done. Meat Loaf sold out a three-night run at New York's Bottom Line in a matter of hours. His following in Northeast is legion, but the best Meat Loaf performance story is the one about the CBS Records convention in New Orleans. Apparently, Meat whipped his audience of record promoters and industry elite into such frenzy that they collectively destroyed the ballroom in admiration.

Meat Loaf is not going to be everyone's favorite dish. But when he starts throwing weight around, you might want to be there. Every concert could be his last. 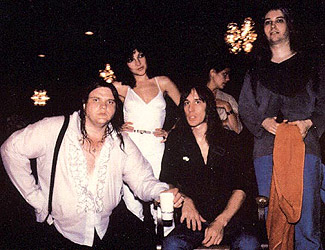 To date, rock satire has leaned either to the slapstick or to the artsy - the Mahavishnu Orchestra or the Tubes.

Now comes Meat Loaf, a parodist so accomplished that the result is taken at face value by most of his audience. Rock superstars, heavy-metal volume, pretentious lighting effects, choreography, and the themes of frustration and revolt which obsess many rock acts receive a sound drubbing at the hands of Meat Loaf and his accomplice/composer Jim Steinman.

No one in Meat Loaf's act just walks onto the stage. Each member of the band makes an entrance, and once on, is continually snapping into the hands-on-hips pose of a topless dancer. Steinman appears to the sinister death march of a drum roll, caressing his black leather gauntlets and pounding fist into palm. He removes these one finger at a time to reveal the white gloves of a concert pianist, which he then pulls off with his teeth.

Meat Loaf himself, his 250-plus pounds squeezed into a tux and ruffled shirt, stalks to the edge of the stage and eyes the audience predatorily before swigging from a bottle and spitting on the floor. He clutches his trademark prop, a reddish chiffon scarf. There is apparently an inexhaustible supply of scarves, several of which are tied around his mike stand, and of tuxedo pants. Saturday night at the Warner Theater, Meat managed to destroy two pairs, ripping the inseam of the first from crotch to knee, and splitting the seat out of the second.

The band opens with the title cut of their Epic album, "Bat Out of Hell," which is probably the best takeoff yet on Bruce Springsteen. Like the best parody, "Bat Out of Hell" is successful enough to get by on the very ground it parodies and may well become a hit single. But it is, in fact, a thorough rip-off of the "Born To Run" album, and specifically of the "Night" track. Sprinkled throughout are riffs, metaphors, even volume and tempo shifts lifted and transplanted with admirable suavity. 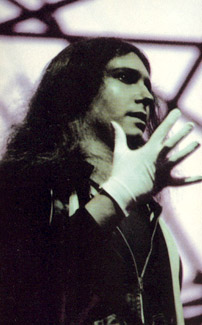 Steinman's work is much smoother than the Neil Innes’ Beatles parodies in "All You Need Is Cash," the Rutles special. "Bat Out of Hell" proceeds logically and dramatically (as it did when Springsteen wrote it the first time), while the Rutles numbers jam together familiar phrases from three and four Beatles hits at a time!

Meat Loaf (Marvin Lee Aday) and Steinman didn't just stumble over the concept of rock parody on their struggle toward Top 40 heaven. The two met while working in the National Lampoon Show, and Meat Loaf played the mentally defective singer Eddie in the film version of "The Rocky Horror Picture Show." It's not surprising that they were invited to appear on the lampoon of television, NBC's "Saturday Night Live."

In Washington, Meat Loaf's audience appears to be small - only about 500 showed up on Saturday night - but devoted. Those frantic few practically shoved the opening act offstage, yelling for Meat Loaf, and emerged from the Warner into the relative quiet of Pennsylvania Avenue wailing, "Me-e-e-at!"

Of course, there is the possibility that all this isn't meant to be funny. But I don't believe it.