The letter poured in! (Well, half-a-dozen, actually) - "Why the hell is Bonnie Tyler in the HM charts?!" was the general theme of the semi-literate scrawls of our aggrieved simian subjects!

Wooo, were they wild! How dare the sultry but hoarse crooner of Lost In France and Heartache, MOR faves both, attempt to veer across the highway into the fast (and hard) lane! But wait a minute! It turns out that nobody was madder than... 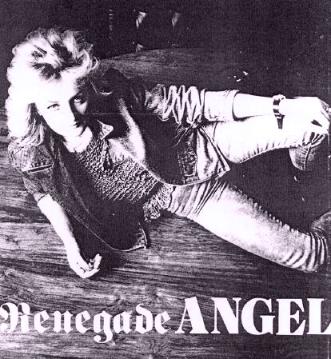 Bonnie Tyler, herself. At last, that's what she is. Encountered in the skyscraping (well, 4th floor) echelons of the CBS boardroom, the blonde pouter turns out to have a Welsh accent that turns her voice from sounding like honey poured out in moonlight to a Secombest lilt.

And she's a rocker: "I'm so confident about this album, because it's my taste in music instead of doing stuff that I've been told to do."

That'll surprise a lot of people, I suggest.

"I wasn't really involved before, I was like a puppet, you know? Most of the songs I recorded then were by my managers back then ... I'm not knocking it, because I came straight out of the clubs in Wales to having success and hits. But I wasn't signed directly to RCA, I was signed to my management's production company.

"We always got on well but they write country sort of songs, you know? My contract came up for renewal and it was hard telling them I didn't want to resign with them because we'd never had any fights or anything, but they agreed that I should do what I wanted."

However, the change from female Rod Stewart and housewives hitpick to (in)credible rock singer is not quite as easy as the reverse option (of Elkie Brooks et al). Sticking to your guns can mean sticking in the mud. Bonnie stuck, and if a year ago you'd have told me I'd be interviewing Bonnie Tyler about her fab new rock album in 12 months I'd have laughed up my sleeve and requested you to pull something else.

So would've Bonnie: "People probably think I disappeared off the scene for the last two years, which I did, but I've been at home listening to hundreds of cassettes from different publishers.

"Before I'd just have a tape of some songs sent by my managers and asked which ones I liked on it! I narrowed it down to 20, then I made demos and got it down to five, and we'd approach CBS. My new manager used to work at RCA, and he always thought I should be doing this sort of stuff, whereas the other guys wanted me to go even more country.

"We had various producers in mind, but I never thought Jim Steinman would say 'yes.' In fact, he didn't at first, but then he came back and said it was such a weird idea, that he'd like to do it."

Steinman, writer of all the songs on Meat Loaf's mega-massive Bat Out Of Hell, probably need never work again from a financial point of view. But he has a natural energy that needs outlet, and if B.T. is to believed, this LP will at least pay his wine bills!

Other producers who would have made very different meals of the project were considered. Tom Dowd and Phil Collins being two who might now be muttering into their cocktails in regret. But the man in the black shirt and the red tie won out.

"I wouldn't have said 'yes' if I was Jim either! Anyway we went to meet him in his apartment in New York. He played me Blue Oyster Cult's 'Going Thru The Motions' and Creedence's 'Have You Ever Seen The Rain', and he says now that if I hadn't liked them he'd have known the whole thing wouldn't work.

"Then he played Total Eclipse Of The Heart on a grand piano for me. When he plays he practically knocks it through the floor, he's incredible! He wont give you it on tape, he has to tell you the big story and play it for you with Rory Dodd singing and the whole thing...I'd never expected him to be so into it," she says with genuine emotion, "I'd been involved in so many Mickey Mouse things before!

"Then he played a song called Faster Than The Speed Of Night and I knew this was it!" (Obscurists might like to know that archivist/fan Martin Eagles informs me that both tunes evolve from the theme music Steinman composed for a movie called Small Circle Of Friends.)

The latter song is the title track of the LP and her new 45 to boot, while the success of the former prompted Jim to send Bonnie a massive bouquet and flood the CBS office with telegrams. The man does things BIG. And strange; who else would fill one LP with tunes by BOC, Creedence, Alan Gruner of Cash Pussies infamy and so much more? The LP has 90,000 advance orders, B.T. informs me proudly.

"He gave me a lot of confidence because he told me that I was a great rock 'n roll singer that'd never been used properly, and that I'd be able to sing these songs with no problem. In fact, nearly all the vocals we used were guide vocals because we felt they were so good we just couldn't improve on them."

So she's happy. But how about the moaning HM punters and their stupid sectarian quibbles about her status in the rock world?

"I think people just ought to listen to it with an open mind and forget Bonnie Tyler really. You see, Bonnie Tyler as used-to-be wasn't me anyway, I was just put into a bag which I couldn't help at the time."

"I'm just fortunate that I got out of that in time and people respect me for what I'm doing now, because it's mainly my idea. Okay, I was lucky to get Jim, but even if I hadn't, I'd have still had quite a few raunchy songs on there."

Soon she forgets the devil's advocate position of the question and bubbles over again into natural enthusiasm for her album - it's like watching someone get out of a prison of some kind.

"I've never had so much fun. There was such a good atmosphere in the studio. I had Roy Bittan doing these great arrangements on piano, and Max Weinberg was brilliant on drums, both from Bruce Springsteen's band.

"And Rick Derringer did these great guitar solos, like on 'Have You Ever Seen The Rain,' where I just wanted to scream along with them because they're so fantastic. Rick asked me to do a track with him for his album too! And then I had a duet with Frankie Miller. Now there's another one who I don't think has had the right songs." Jim, Jim ... !

Will she tour to back up this project?

"I'd love to tour here, because the pre-sales are incredible and it's here I've always wanted to make it! I mean, I think I only sold about 400 albums here before, and the music is great stage material, y'know?

"I mean, with 'Lost In France' and 'It's A Heartache,' what else can you do but just stand there and sing it? "

And more bizarre videos, please, like the one for 'Eclipse.' "I don't think that they've ever hardly shown all of it on TV. I'm supposed to be dreaming in it."

"Jim directed that, too, that's why there's all these American footballers in it! I wear a dress in it, and I hate dresses! I won't be wearing anything like that on stage, that's for sure!"

Pre-Raphaelite video fantasies die with the dawn. But I suppose the 64,000 dollar 'Bonnie Tyler Out Of Hell Revisited' question is as to whether Jim Steinman will be doing the follow-up to 'Faster Than The Speed Of Night' (another great Jimbo-cliché title)?

"Well, that's the nice thing, Jim's already said that he'd like to do the next one if he can. And we didn't use all the songs we had this time, so there's about three certainties for the next one." And she won't reveal the names. Hey, how about 'Sing It, Shout It' by Starz, or 'Do Ya Love Me' by Kiss, or ...