The Only Time Left Is Now

The Vaults Of Heaven
(A Song Of Indoctrination)
Minister, Baptist Congregation

One sweet day when the whole world's ready
We'll awake to a glorious sight
Our Savior returns to guide us
We'll be gratefully blinded by light
Open up the vaults!
Open up the vaults!
We've got to find the keys!
The nights have been growing darker
So much darker now than sin
We'll open the vaults of heaven
The treasures are there within

Inside a Baptist church in Louisiana, a few days before Christmas in 1959, a town gathers in prayer...Having lost her mother recently, a young girl on the brink of womanhood (Swallow) is joined by her father (Boone) and younger sister and brother (Brat and Poor Baby)... "One day soon, those heavenly gates will open and our Savior will once again walk amongst us," reassures the minister...When that day comes, it is promised, they will be plagued by pain and loss and sorrow no longer...But they must recognize the Lord when He returns for those that do not "will burn in eternal hell"...

I Never Get What I Pray For
(A Song Of Yearning)
Swallow, Brat, Poor Baby

As church ends the congregation exits the building...The grown-ups turn to face an immense neon sign that proclaims "JESUS LIVES"...The children turn to face the light shining down from the heavens...While at play Swallow, Brat and Poor Baby sing of the things they always wish for and never get...Brat wants to be "beautiful and sexy and smart"...Poor Baby wants a football and a big Christmas bonfire...Swallow, most of all, just wants her mother back "if only for one night"...

While going over their list of unanswered prayers they notice their farm worker (Edward) about to throw a sack of kittens into a sewer to drown them...They confront Edward who tells the kids that the kitten's existence was something merciful Jesus had never intended and it would be "The kindest thing to send 'em back to him"...As soon as he is out of sight Swallow jumps into the sewer to rescue them...Having saved the kittens the children realize that it has gotten late and night is falling...As they head home they see a group of strangers in town...They are revivalists planning to pitch a tent and hold a Christmas eve meeting...One of the outsiders (Earl) pull a snake from a box...The children are mesmerized as the law (Sheriff) appears on the scene reminding the children again that it has become late and that they should be getting home where they'll be safe...

It Just Doesn't Get Any Better Than This
(A Song Of Denial)
Boone, Swallow, Brat, Poor Baby 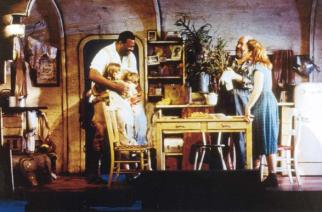 If your mother was here
You know what she'd say
"Don't complain, life is tough
But you survive day to day
Cause the things that matter
Surround and embrace us
And the comforting places
They always will take us
Reassure us our God
He will never forsake us!
So we really don't miss
What we think that we miss
And it just doesn't get any better than this"

While still on their way home the town rebel (Amos) rides up on his freshly painted motorbike...Two things become immediately obvious - he has an appetite for adventure and for Swallow's affection...The latter of which is noticed (and not at all appreciated) by his equally adventurous colored girlfriend (Candy)...At home inside their trailer the radio plays a song called "Cold" by the Everly Brothers...It's interrupted by a special report...Just before Boone switches off the broadcast it's announced that there has been a prison break - a dangerous convict has escaped... Edward drops by to bring over a small Christmas tree...The family sits down to dinner...It's eggs again....Boone explains that there isn't enough money to buy wood for a Christmas bonfire or presents...He consoles his kids by telling them that they have food, shelter and love and that with those things in their possession there is really nothing more to long for...His own tears make it clear that he too wants more...

Whistle Down The Wind
(A Song Of Faith)
Boone, Swallow

Composing himself Boone tells the kids, "No matter how bad things got your mother always had the words to put 'em right again." He sings Whistle Down The Wind to them...After the evening meal, outside of the trailer, Swallow continues to sing her mother's song...

The Vow
(A Song Of Dedication)
Swallow, Brat, Poor Baby 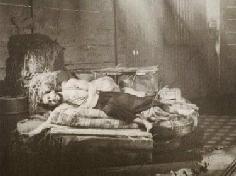 Swallow has managed to save a little milk and feeds the kittens which are safely hidden in the barn...A storm starts rumbling in the distance just as Swallow discovers a man (The Man), wounded and bleeding in the hay...Before passing-out he speaks, "I am Jesus Christ! Don't tell anyone I'm here"...A bolt of lighting finds a terrified Swallow now joined by her brother and sister...Discovering puncture wounds in The Man's hands and feet, and remembering the words of the preacher, "He will return," the children accept The Man as the son of God and make it their duty to protect and keep him... 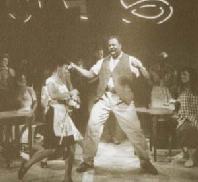 On the other side of town the locals are gathered in a pub drinking and singing along with Edward...Amos enters the barroom and approaches Candy who is working as a barmaid...The couple talk about their plan to leave town...The drinking and merriment is brought to an abrupt end as Sheriff arrives...He tosses Edward and Candy out and then tells the townsfolk that clothing belonging to the escaped convict has been found less than a quarter of a mile away...the people react with intense alarm...

Unsettled Scores
(A Song Of Anguish)
The Man 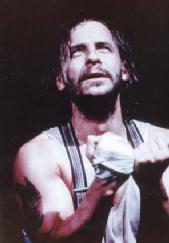 Back on Boone's farm Swallow and her siblings are joined by a few friends that have come to see "Jesus"... They introduce themselves while Swallow tends to The Man's wounds...The kids are sternly reminded not to tell anyone else that he is there...After nearly being discovered by Boone and Edward, Swallow assures The Man that she will return soon to care for him...She also tells him that she will pray for him...The Man is once again left alone...He looks back on his life with anger and regret...He looks forward to the future with grim despair...

If Only
(A Song Of Sorrow)
The Man, Swallow

Later that night The Man hears someone entering the barn and breaks a bottle creating a makeshift weapon...It is Swallow returning, as promised, with food and warm water to wash him...She tells The Man that she loves him...He is struck by her innocence and kindness. "You're so pure. You look like an angel. You look like you came straight down from heaven," he remarks...She reveals her greatest hope - that he will be able to bring her mother back...He tells her that he is too weak to perform miracles at the moment but with continued care he might be able to show her one soon...Together they sing of their desire to see things they've lost come back to them...

Those good girls never know
What they're missing
But us bad girls almost always do
And what we're missing most
Are the real good times
I want 'em bad
And I want 'em now
I was born going faster than the limits allow!

Out on the highway Candy and Amos dream of a world beyond these borders...They want a chance to indulge their wildest fantasies and desires...They plan to be in New Orleans by Christmas morning before moving on to California...Edward finds the couple together and, being a black man himself, warns them of the danger an interracial couple may face if caught by someone taught to harm without reason... 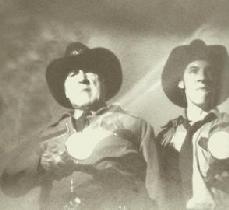 As Amos and Candy plot to free themselves of their surroundings the townspeople conspire to rid their home of the evil that has entered it...Word that a killer is among them has spread and their frenzied hatred continues to swell......Earl sees Swallow, Brat and Poor Baby in town and invites them to the revival meeting...Poor Baby says he may attend and adds, "If Jesus is feeling better, I might just bring him with me"...Brat and Poor Baby ask Amos to bring them to the revival meeting and let on to him they are keeping "the biggest secret in the world"...Amos questions Swallow as to what kind of secret it is...Swallow answers, "The only kind there is - the kind you don't tell"...She gathers up her brother and sister and heads home as Amos drives off...Overcome by fear and hysteria, men and women in town are arming themselves and preparing to kill in the name of God "for the sake all the children"...

Long Overdue For A Miracle
(A Song Of Fancy)
The Children

We gotta go and see him now No! Maybe he should rest Let's go and get a Bible Then we'll make him take a test! I bet they'll try and hurt him We'll do whatever it takes He saved us once Now we'll save him We're all he's got - for Heaven's sake!

The kids in town have a far less horrible mission in mind...The miracle they've needed for so long has arrived...Jesus is back...Now their lives will be so much better...Their moms will have pretty dresses, their dads will have jobs, there will be toys and, most of all, lots and lots of love...

When Children Rule The World
( A Song Of Innocence)
The Children

Doves and kings and shepherds and wisemen
Came together, followed the star
They all gathered down by the manger
They came from so very far
Midnight is clear
Our savior is here
He's gonna guard each boy and girl
No hunger or thirst
The last will be first
The night that children rule the world

With Jesus back on Earth all things will be restored to proper order...Grown-ups will see just how wrong they've been about so many things...Together, with the help of God, the children will establish a world that is truly fair and just...

Annie Christmas
(A Song Of Spirit)
The Man, The Children 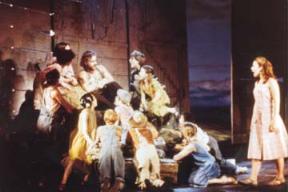 Off to meet Jesus the children converge on the barn... Shocked that so many know he's there and believe he's Jesus, The Man is forced to do some quick thinking to maintain his cover...Unable to meet the demands for a story from the Bible, The Man offers up one from "the next testament"...He tells the story of Annie Christmas... She was 6'8" and 300 lbs. with a curly black mustache... She was a drinker, a fighter and a woman in love with a man who didn't even notice her until the day she wore a necklace stretching 30 feet in length...A necklace composed of beads placed in remembrance of every ear or nose Annie had bitten off of men who had mistreated her...

No Matter What
(A Song Of Allegiance)
The Children, The Townspeople 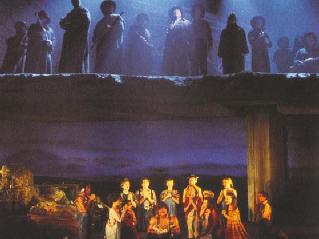 The children enjoy the story but beg The Man for it's moral...He snaps under the pressure, screams at them and collapses in despair...He doesn't have an answer...The children approach him tenderly and bestow upon him their earthly treasures as well as their faith and devotion...He is overwhelmed by their sacrifice and generosity...

No leniency...In town the lynch mob gathers with it's promise for The Man...his instant demise the moment they find him...