It's been a long journey down the highway since Bat Out Of Hell, Meat Loaf's sonic debut, first blasted its way into rock mythology. Over a decade later, however, the classic heavy pop crossover album is still in the charts (a la Dark Side Of The Moon) - a tribute to the big man's vocals, Todd Rundgren's production… and the songs of Jim Steinman - twisted, visionary fantasies that meld Edgar Allen Poe gothicism with bubblegum opera epics. We all know what happened to Mr. Loaf and Mr. Runt, but what of Steinman, the self-described 'Little Richard Wagner' of rock 'n' roll? Where is he now? 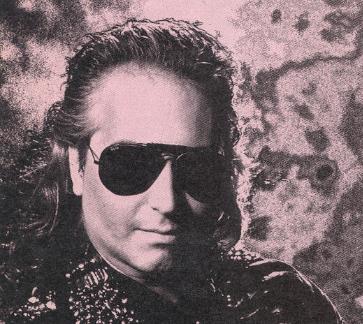 Right here in London, that's where, promoting the latest emission from the fevered Steinman brow: Pandora's Box is the group, Original Sin is the album. Virgin is the label. But what is the scam? Steinman, grayer than ever and carrying a little more weight than of yore, beckoned yours truly into his hotel suite and spilled the bizarre beans on his decidedly odd solo project, the first since he adopted Bad For Good (originally planned as the follow-up to Bat) when Meat had the famous crack-up that rendered him unable to croon.

"It shouldn't have taken so long for me to do something again, but that thing with Meat losing his voice was such an Olympian task that it soured me. It seemed like such a relief when I was asked to simply produce Bonnie Tyler, not to have to do the whole thing, the whole vision. I was exhausted! It was ten months of torture trying to get him to sing that follow-up, a gruesome experience. I saw these other producers getting away with murder, making a lot of money, so…

"But I got bored with just production. The sixth time a song came back from Donna Summer with a note saying 'It's great but it's far too heathen!' I gave up. I had no idea how to Christianize it! I wanted to do Frank Sinatra and Diana Ross too. Barbra Streisand was great though. She didn't want to sing some of the lyrics on my song 'Left In The Dark' because they conflicted with her feminist ideals! Amazing voice."

Steinman has worked with everyone from Phoebe Snow to Billy Squier of late, but the weirdest experience of his career has to be his abortive attempt to producing the doyens of steely commercial rock, Def Leppard.

"They made Spinal Tap look like the Julliard String Quartet! I could've made a great record with those guys, too, but it was four months of horror."

Back to Pandora's Box. Not your average solo album?

"A lot of people didn't like the title. At one point it was going to be called 'Rockman Philharmonic' because my name means 'rock man' in German. Then it was 'Dream Engine' after a play I once did, but the head of the label in Germany said that sounded like a German disco band! Pandora's Box is appropriate because it's about sin - remember the great Pabst movie with Louise Brooks?"

The record, with a cover by noted fantasy artist J.K. Potter and a snakes 'n' graveyard video by cinematic bad boy Ken Russell, veers between Steinman's disembodied poetics ("I've Been Dreaming Up A Storm Lately"), to keyboard insanity ("Requiem Metal" - "my version of Verdi") to hot pop poop (the single, "It's All Coming Back To Me Now"). With nods to Burt Bacharach, Love, The Doors, the 20th Century Fox cinema anthem and a sampling of Hendrix's voice, it's hardly a normal album, but it's one which proves that rock isn't likely to be bankrupt with people like Steinman around.

"Virgin have been great - they're treating it like it was the new Phil Collins Album. And I've got Ken doing the video for the single. It's my reworking of a scene he did in the movie Aria. I usually co-direct, but when you hire Ken he kind of takes over. He knows what he wants."

As does Jim Steinman.