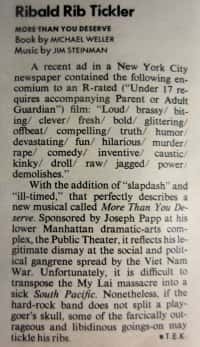 With the addition of “slapdash” and “ill-timed,” that perfectly describes a new musical called More Than You Deserve. Sponsored by Joseph Papp at his lower Manhattan dramatic-arts complex, the Public Theater, it reflects his legitimate dismay at the social and political gangrene spread by the View Nam War. Unfortunately, it is difficult to transpose the My Lai massacre into a sick South Pacific. Nonetheless, if the hard-rock band does not split a play-goer's skull, some of the farcically outrageous and libidinous goings-on may tickle his ribs.