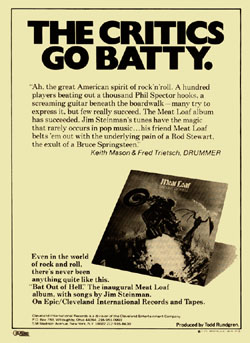 Riding up the hotel elevator, mere minutes away from a face-to-face confrontation with the one and only (you’d better believe it) Meat Loaf, I’ve got this Goddamned stupid Henny Youngman joke ricocheting around in my brain and I just can’t seem to shake it out:

Considering the sheer physical girth of critical mass that comprises The Loaf, clearly this is not a joke one would recount in his presence - at least, not out loud.

Y’see, Meat Loaf isn’t fat so much as he’s just…well, slightly overweight. I mean, when you usually think of a fat person, inevitably a picture comes to mind of a being somewhat akin to a sluggish, flab-layered jelly donut, incapable of even the most simplistic of motor activities. Meat Loaf, on the other hand, has the kind of natural power presence, which indicates that, if he so desired, he could destroy you into a pulpy mess using only the pinky finger of his left hand.

In fact, the only other person I’ve ever met who could even come closely to the above description would be Orson Welles. Indeed, after watching The Loaf command the El Mocambo stage for two nights last month, I was awed by the fact that if Orson Welles of Citizen Kane (i.e., POWER) ever merged with the Orson Welles of Touch Of Evil (i.e., SIZE) and formed a rock ‘n roll band, he’d be Meat Loaf.

“Yeah, a few people have mentioned that,” says Jim Steinman, Meat Loaf’s pianist and principle composer (not to mention Joseph Cotton foil.) “Yeah,” he continues, “Touch Of Evil is my favorite. The great thing about Orson Welles is the combination of power and brilliance. I really identify with Orson Welles, too. I mean, he’s my favorite film director - he and Hitchcock. Touch Of Evil and Psycho are my favorite movies, too. I’ve seen both of them twenty times. You can’t top anything in movies for Orson Welles’ entrance in Touch Of Evil, coming out of that car.”

At this point, Meat Loaf (who up until now had been conducting another interview in the bathroom, of all places) emerged into the room like a wild panther stalking his prey. Eyes wild and long blond hair flying back, The Loaf looked as if he had just eaten Ted Nugent for breakfast.

“Boy, is it ever hard trying to be Jim Steinman and Meat Loaf at the same time,” he growled at me, referring to the one-man bathroom interview. “What’s all this about me being the Orson Welles of rock?” he demanded. He had heard the comparisons before, I gathered. “Orson Welles…yeah,” he admitted in a low tone.

After all, when he’s performing, Meat Loaf sure looks the part, storming all over the stage as if he owned it -

“I DO OWN IT!” he bellowed in a voice that almost shattered the windows. “As far as I’m concerned, it’s mine,” he glared.

I mentioned that it was great to hear a vocalist who can hit the same notes on stage that he does on the record.

“Yeah, I work at makin’ it,” explained The Loaf. “My auditions are like athletic events,” confides Steinman, a full moon playing lightly on his shoulders. “When I was doing theater and I was auditioning singers for musicals, all I’d ever say was ‘could you do that louder and could you raise it five steps?’ I just can’t stand hearing a singer singing comfortably.”

“He never asked me to do that, though,” says The Loaf smugly.

“But the habit’s always been with Meat to end up on a hospital bed having sung five nights in a row,” counters Steinman.

“’Do you think we could lower the key a bit?’” says Steinman impersonating The Loaf. Would he do such a thing to help out his partner’s throat?

“ABSOLUTELY NOT! It’ll sound great - even if you’re bleeding. I think it’s thrilling even if your voice is ripped up…”

Suddenly I’m aware of a faint scratching outside the hotel room door. I ignore it and shift uneasily in my chair.

“I CAN’T STAND OPERA!” screams The Loaf in a furry of obscene denunciations.

“Meat’s not into opera, is he?” I ask Steinman.

“Uh, no…he’s not into it…he’s not a real opera freak but we’re both sports freaks…”

At last! A topic I can sink my teeth into! “Oh yeah?” I crow, “Whaddya into? What kind of sports? Hockey? Baseball?”

“Didja follow Oakland a couple of years ago?” I ask.

“I was a Met’s fan,” confesses Steinman. “I love baseball more than anything. Football, is, like, chaos.”

Suddenly Steinman’s eyes glaze over, trance-like. He leans towards me, his voice a menacing monotone of suppressed passion. “The beauty of baseball is that it’s…infinite…”

The scratching outside the door becomes more pronounced; a thick gray mist starts wrapping itself around my ankles.

“A baseball inning could go on, theoretically, for ever…”

“But what’s this got to do with your music?” I scream, heading for the door.

Just as the elevator doors close in front of me, Steinman yells, “IF FOOTBALL IS LED ZEPPLIN, THE GREATEST THING ABOUT BASEBALL IS THAT IT’S THE BEACH BOYS!”

I adjusted the garland of Wolfbane around my neck, pushed that button marked ‘lobby’ and prepared myself for the slow descent down.