Meat Loaf
“Bat Out Of Hell II : Back Into Hell”
Virgin 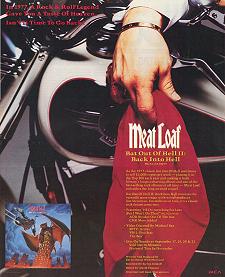 It seemed an obvious idea; record a sequel to one of the best-selling albums of all time. But though rock ogre Meat Loaf and super-Phil Spector Jim Steinman were initially reluctant, as their own solo careers had suffered in the shadow of the first Bat, the reunion produced an album that was more epic and operatic than the original, with songs more boggle-eyed and romantic than before like the giant hit I'd Do Anything For Love (But I Won't Do That), songs verging on the parodic (Objects In The Rear View Mirror May Appear Closer Than They Are) and songs that made the rest of rock cower (Everything Louder Than Everything Else). Q85