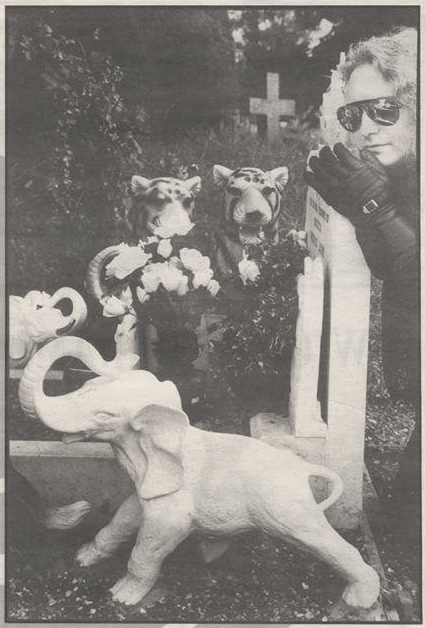 It's midnight. It's dark and spooky. Top zombie hunter STEVEN WELLS tracks down the Richard Wagner of rock 'n' roll, aka JIM STEINMAN (of Meat Loaf, Bonnie Tyler, Barry Manilow, Def Leppard, Barbra Streisand and Sisters of Mercy fame) and talks to him about his new group, PANDORA'S BOX, and why Phil Everly smacked his brother and made him bleed. Lurking in the bush is is ace lensman A.J. BARRATT. OK, let's do it…

Jim Steinman is a large and balding American motormouth in love with Harleys and electric guitars and the stiffened ponytails and stained leather jackets of The Shangri-Las. He writes and produces songs for lots of pop people some of whom are so sexy that trousers explode in spontaneous and violent thrashspasms for miles around every time they raise an eyebrow just so. Some of them are so unsexy that you'd rather make out with the dogs on the street. We'll get to them later. Because?

Because Jim is here to promote his new album, ‘Original Sin’, the first product of his new group, Pandora's Box, which is three, no, four female singers so raunchy that they make Tina Turner sound like Tiffany and a band which, apart from thirtysomething Jim on organ, is composed entirely of thin teenage boys because “the girls insisted”.

In a North London graveyard Ken Russell has impaled a motorbike on rusty railings surrounding the tomb of empire builder Sir William Molesworth Bart (1810 - 1855). The crushed and spurting cadaver of a beautiful teenage girl lies smashed and smoking in the graveyard sod.

"ACTION!" screams Ken. Fire bursts from the ground to engulf the bike which spits great gobs of molten chrome and rubber over the half-naked satanic leather queens in studded codpieces and biker caps that writhe like bad sex on top of the tomb.

This is a video for a love song - ‘Original Sin’. It could be an advert for Nat West or a documentary about the imminent destruction of the African White Rhino. This is a Ken Russell production. If Ken was making a road safety film he'd manage to work in devil dancers in leather gear prancing like billy-o on a dead Tory's tomb somehow.

Jim! Are you working with Ken Russell to moderate your own sense of excess?

"Oh God! Ken as a moderator! What a concept hee hee!"

This is a meeting of two minds to whom subtlety is somewhere in the dictionary between shit and syphilis.

"The record company's so nervous anyway because of the BBC – but the things they focus in on! The woman who runs video for Virgin was saying that the panther and the tiger were a terrible problem and I just could not understand that; in the original script they just come up and lick her hand! She thought it reeked of bestiality and it was disturbing and offensive. I mean, they always shoot big cats heavily sedated. Just like in a Guns N' Roses video really."

More bikes bursting out of graves?

"I didn't even realise that connection… We filmed the horse yesterday surrounded by fire. It took a big dump, which is what happens in Guns N' Roses videos actually. The dump wasn't captured on film but it is indelibly burnt on my mind. The horse was fine with the fire, it was the minute the dancers got involved, it was the horse from Excalibur…

"There's this opera, Salome, I don't know if you saw it? There's meant to be this girl, just 15, sexually hypercharged and hotwired and all these people basically want to f‑‑‑ her and she agrees to dance for these people if they give her the head of John The Baptist.

"The opera itself is amazing. It's the only opera I know where the music itself can make you sick. The music is so nauseous. It's so lush and sickly – ‘humid’ is really the word. And whenever you see it this 15-year-old girl is played by a 55-year-old Bavarian asshole. A fat pig. There's something great about that. And I kinda think rock 'n' roll is silly, in the best way. The silly things are kinda the things that are alright."

You got where this guy's coming from? Good value for money this article or what? But it gets better. Jim Steinman has worked with everybody in pop worth spit, from Bonnie Tyler to Def Leppard.

"If you play a role really well and it's an extension of you anyway, it starts to fit you like clothes. It's like Andrew. I mean, Andrew really is gothic. I think he's really silly, he's really funny. He's obviously playing a role but it's obviously genuine… If I ever work with Andrew again I want to do this song ‘First We Take Manhattan Then We Take Berlin’. f‑‑‑ing great song – one of the all time great songs. Sort of a disco ‘Deutschland Uber Alles’. I used to like German cabaret of the '20s and I think that's where he fits in – like he doesn't even have the energy to sing…"

"I remember everybody being really shocked that I would go and do a Barry Manilow single. I couldn't imagine not wanting to do it! There's this guy – and his audience is old people and their parents? But they love him! It's real funny that you have young people in rock 'n' roll bands all over the place all doing fourth rate Jim Morrison stuff like – you have to experience everything, man – and they'd never have the balls to experience Barry Manilow.

What made me appreciate it was Trevor Horn. All he wanted to talk about was Barry Manilow. He kept ranting – why don't they play him in Britain? Heavy metal pop! That's what Barry is! – There's something both incredibly sexual and asexual about him. And it's also very mothering. I mean, they want to take him home and bonk him and then raise him and send him off to school.

"I like him because he's not afraid to admit that it's showbiz. These f‑‑‑ing groups! Those American stadium rock groups! I mean, I like Guns N' Roses. I think they can pull it off because they are genuinely demented. But I mean those boring rock 'n' roll groups! It's the easiest thing in this world to get those pants, those chains and act like that.

"I mean, I think Bruce Springsteen is showbiz, but all the people around him will tell you he's ‘real’ and he's ‘street’ and ‘grit’. Do you know who the most boring rock group in the world is? f‑‑‑ing U2. Give me Barry Manilow every time!" 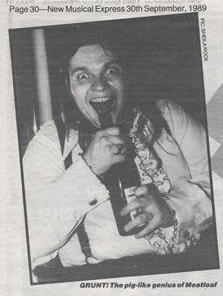 "After that first album, Meat just lost it completely. I have tapes that I've made just in case anyone wants to hear it again. It sounded like Linda Blair in The Exorcist. Like, in the song “Bad For Good” – the opening lines of that are: "The sea is whipping the sky / the sky is whipping the sea…" just two notes! And when Meat sung it, it came out as ‘GRUNT! GRUNT! GRUNT! GRUNT!’ I had to listen to this for nine months. I wasn't allowed to say anything negative. I couldn't use the word ‘flat’, I had to say – ‘It sounded a little under the note…’

"So they brought in this guy Jimmy Iovine who was totally full of shit and he gives me this - “Y'know this guy Meat Loaf, he's the biggest, he's the greatest rock 'n' roll singer in the world, there's no problem… You gotta build him up, stroke him…“

"So on the first day, Meat arrives and Jimmy says – “come here, I want to talk with you” – and he goes into a hunch with Meat in the control room door and there's Jimmy – “You're the greatest singer in the world…” – gives him a 45 minute pep talk and Jimmy comes out and goes – “He's fine, it's going to sound f‑‑‑ing great…”

"And Jimmy just stands there and then he says: ‘This pig can't sing a f‑‑‑ing note!’"

"The Everly Brothers – they're really f‑‑‑ed up; one of them is anyway, Don. But, um, they did an album together when they hadn't sung together for about nine years. They start singing. They sing only the way brothers can sound. And they're singing and Paul the producer is going – “This is great, man! They're singing! These guys are so f‑‑‑ing good…”

As Safe As Sex With A Rampant Warthog

Yes folks, Phil Everly learnt the hard way that there aren't no thing as safe sex. As Jim Steinman says:

"In sex you reveal yourself, physically and emotionally – and that's f‑‑‑ing dangerous."

And that's what Pandora's Box is about. Ken Russel is amusing his friends with a story the cemetery keeper told him about how he keeps finding tombs broken open and the bodies "interfered with" while Jim is giving me the lowdown on an album full of songs that start with a stroking whisper and end in a stonking scream. 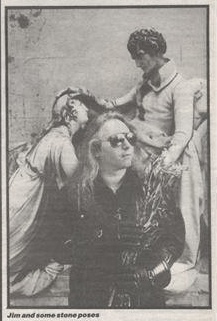 Jim Steinman started off his career doing rock 'n' roll theatre to audiences of '60s student radicals who thought he was an asshole. Ask him what the most exciting thing he's ever done is and he says:

“Consciously deciding not to grow up, not to be an adult and have a proper job and stuff…”

Ask him what he thinks about drugs and he says:

"I think all drugs should be legalised. I don't know where the f‑‑‑ these governments ever decided they had a right to do this anyway. It's a pure, victimless crime. I don't think most drugs are bad, I never had any trouble sticking to the drugs I liked. I think drugs are like plugging into a Marshall…"

This is the man who has written a sci-fi rock 'n' roll version of Peter Pan. He also makes brilliant records and, like the man says: