We've added a few new sections to this website recently.

Meat Loaf has a message (and health warning) about Bat Out Of Hell The Musical (watch the video with sound on!)

The cast have been announced for the 2019 NYCC production of Bat Out Of Hell The Musical.

Jim Steinman's Bat Out Of Hell The Musical hits the US this summer for a strictly limited 6 week run, at the New York City Center.

The story is set in the near future, in the dystopian city of Obsidian, built on the ruins of Manhattan. A man named Falco rules with an iron fist from his tower, with his wife Sloane and daughter Raven. And down in the tunnels live a pack of beautiful mutants; Strat and The Lost. Prepare for a story of fire, conflict and love!

Tanz Der Vampire to open in Oberhausen, Germany in October 2019 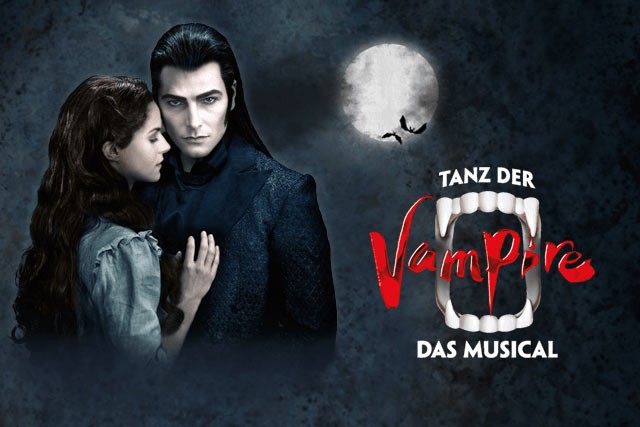 Some good news and bad news for Steinman fans in the NRW region of Germany; the bad news is - Bat Out Of Hell das Musical closes this September at the Metronom Theatre, Oberhausen. The good news is - Tanz Der Vampire is opening at the same venue from October for 5 months!

Dance Of The Vampires to open in Copenhagen, Denmark 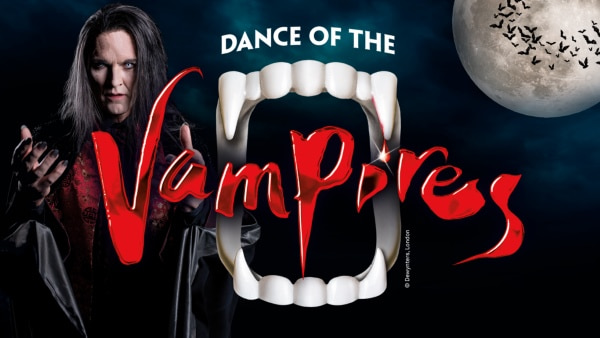 Great news for Scandinavian fans of the musical Tanz Der Vampire - the first ever Scandinavian production opens in Denmark next year! 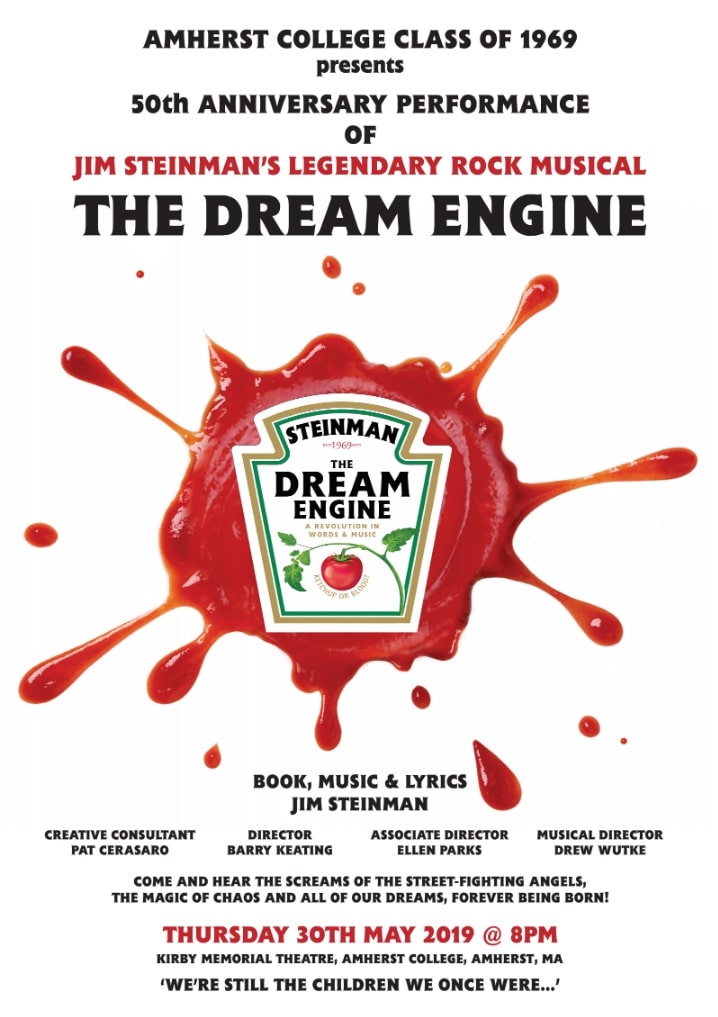 Grammy Award-winning songwriter Jim Steinman's THE DREAM ENGINE will be presented as a special event as part of Amherst College's 1969 class reunion festivities at the location where it all began, the Kirby Theater, with the Tony Award nominated director once again taking the reigns, Barry Keating.

Steinman's international chart-topping global smash hits include Meat Loaf's BAT OUT OF HELL albums as well as Bonnie Tyler's "Total Eclipse Of The Heart" and "Holding Out For A Hero", Celine Dion's "It's All Coming Back To Me Now", Barry Manilow's "Read 'Em And Weep" and Barbra Streisand's "Left In The Dark" as well as memorable musical contributions to the films A SMALL CIRCLE OF FRIENDS, STREETS OF FIRE and THE SHADOW. Additionally, Steinman provided the score for the international blockbuster stage musical TANZ DER VAMPIRE. Most recently, Steinman provided book, music and lyrics for the West End, Toronto and German productions of BAT OUT OF HELL: THE MUSICAL. Of note, Steinman was presented with an honorary doctorate from Amherst College in 2013.

Leading the cast of THE DREAM ENGINE will be award-winning BAT OUT HELL: THE MUSICAL headliner Andrew Polec along with TV/film notable Mimi Kennedy plus several members of the original cast including Larry Dilg and current Amherst students in keeping with the youthful themes of the epic theatrical experience. Special guests to be announced.

Directed by Keating with creative consultation by Pat Cerasaro, associate direction by Ellen Parks and music direction by Drew Wutke, the 50th anniversary presentation of THE DREAM ENGINE portends to be a once in a lifetime experience like no other. Let the revels begin!

THE DREAM ENGINE will presented on May 30 at 8PM at the Kirby Theater at Amherst College. Ticket information is available at the official site here: https://engage.amherst.edu/event/registrations/index/820.

For ONE night only, The Dream Engine returns!

For their 50th anniversary reunion, Amherst College's Class of '69 are putting on a show - scenes and songs from The Dream Engine.

Written by Songwriters Hall of Famer Jim Steinman ('69) and Tony Award Nominee Barry Keating ('69) This will be an hour and a half event celebrating the 50th year of this provocative, controversial work. Show will feature the full Historian's speech, songs with live band, scenes, professional and student performers.

Donations will be accepted before and after the performance but they are not required. This is a free event sponsored by Amherst Class of '69.

Bat Out Of Hell the Musical : North American tour update

Bat Out Of Hell the Musical - North American tour will launch in 2019 ahead of a previously announced season at New York City Center. The production is working with everyone involved to reschedule the dates and news about the North American Tour will be announced soon.

To sign up for priority tickets for New York City Center in Summer 2019, please go to the official Bat Out Of Hell Musical website. 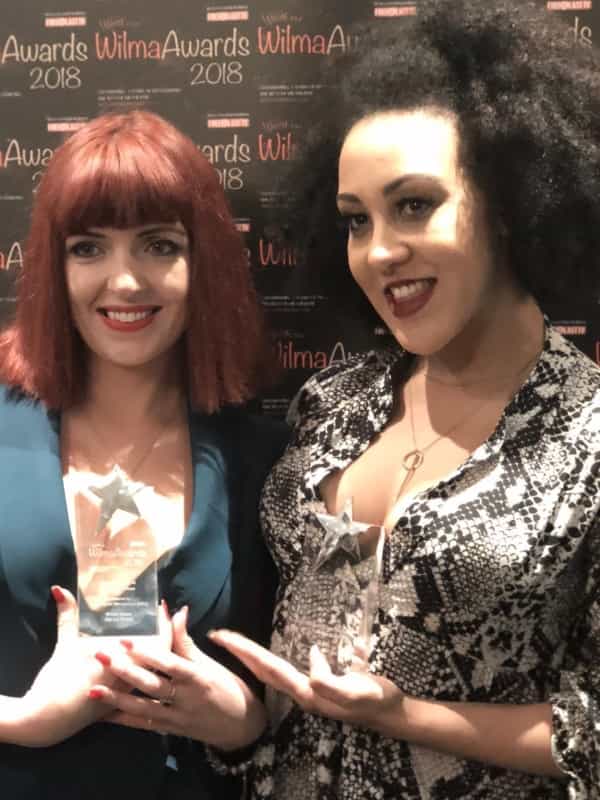 Bat Out Of Hell the Musical : US tour postponed

The remainder of the North American tour of Bat Out Of Hell has been postponed. We will have new dates pending their availability.

Bat Out Of Hell the Musical : German promo videos

Bat Out Of Hell das Musical opens at the Metronom Theatre in Oberhausen, Germany very soon. Previews open 2 - 7 November and booking is currently open through to the end of May 2019.

Some promotional videos, so you can hear the musicianship going into the German production:

BAT OUT OF HELL - Robin Reitsma

Bat Out Of Hell the Musical : North American tour underway

The North American tour has begun - in Toronto, Canada. 3 weeks at the Ed Mirvish Theatre and then on to the US!

A taste of what you'll see - here are Andrew Polec and Emily Schultheis performing a (very short version of) For Crying Out Loud on Canadian TV, shortly before the tour started. 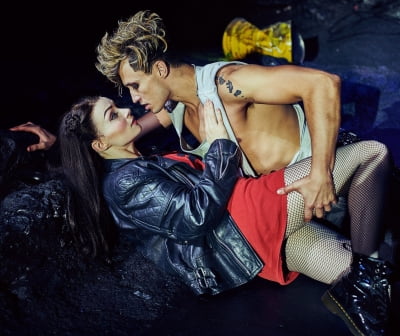 The final show for Bat Out Of Hell at London's Dominion Theatre will be on the 5th January 2019. UK fans, and European fans who prefer to see the show in English (rather than German), time is running out for you to see the show locally. Book your tickets, see it while you can.

This is the end of a chapter, not the book… we must remember that as we give ultimate thanks to the UK cast, crew, band, management team etc. etc. that gave us Manchester and two London runs. You all have set the standard other productions will be judged by. BRAVO and THANK YOU!

Bat Out Of Hell the Musical : German production cast announced

The cast for the German production of has been announced, and everyone is especially hyped to see Willemijn Verkaik taking on the role of Sloane!

Bat Out Of Hell the Musical : US tour cast announced

Exciting news for North American fans - it's your turn to be bowled over by Andrew Polec as Strat, as he switches from the London production of Bat Out Of Hell to the North American tour - for the remainder of 2018 and through 2019.

As Jim Steinman (@realjimsteinman) said in a series of tweets (1/2) to Andrew:

@andrewpolec a line from For Crying Out Loud "for giving me a child when my body is old" comes to mind as I try to find the words to thank you for unrelentingly and tirelessly giving your whole soul to @batthemusical these last few years. @AndrewPolec Another lyric "going all the way is just a start" also comes to mind as you depart London to conquer North America. Thank you my Strat, my Superstar for continuing to bring our dream @realmeatloaf to life.


(In London, the role of Strat is being taken over by Jordan Luke Gage - who has been playing Strat as an alternate, and appeared daily as an ensemble cast member since February 2018)

The West End production of Bat Out Of Hell the Musical has been nominated in several categories for this year's West End Wilma awards.

CONGRATULATIONS TO EVERYONE NOMINATED! (I guess they really love Zahara and Sloane, huh?)

Public voting will open online 7 September 2018 at westendwilma.com for theatre lovers to vote for their winners.

Sunday 4 November 2018 (4-5.30pm) marks exactly five years since the first West End Wilma Awards were held at Freedom Bar, in Soho. The following years were hosted at the Hippodrome Casino and The Delfont Room. This year, a special fifth anniversary gala ceremony will be held at The Arts Theatre in London’s West End with 350 specially invited guests and this year the public can come too!

Tickets are on sale priced £20 / £25. 10% of every ticket sold will be donated to the National Autistic Society, helping to create Relaxed Performances of theatre shows, helping to make theatre accessible to all.

If you would like to attend these awards in person, tickets are available now, from here.

Bat Out Of Hell the Musical : North American tour info!

Bat Out Of Hell the musical have begun to officially announce North American tour info as each theatre confirms dates.

The tour kicks off in Toronto, Ontario, Canada in October 2018, then embarks on a tour around the U.S. through to Summer 2019.

Official website for the North American tour: tickets and info

Bat Out Of Hell the Musical : London production booking extends to January 2019 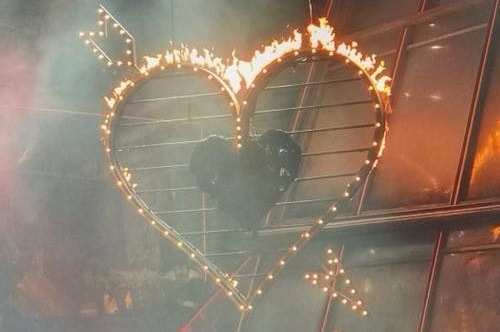 The West End production of Bat Out Of Hell the Musical has extended its booking period from October 2018 through to January 5th 2019!

Official website for the London production: tickets and info

To promote the upcoming German production of Bat Out Of Hell in Oberhausen, Germany, a promotional tour of the NRW region took place, on the 26-27th July 2018.

In sweltering heat, the Bat Truck (carrying a massive portable stage), escorted by a fleet of bikers on Harley Davidson motorcycles, made their way around the NRW region - to Essen, Bochum, Oberhausen, Dortmund and Düsseldorf - over two days. Select cast members (and musical director Robert Emery) put on a free show of around 20 minutes of solid Bat Out Of Hell songs at each venue, thrilling crowds at each stop.

Full footage of each promo show is available to watch on the "Bat Out Of Hell - Das Musical" page on Facebook.